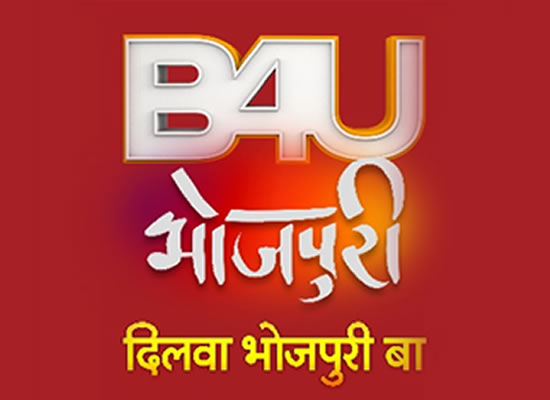 B4U Network popularly known for its Bollywood Music and Movie channels launches B4U Bhojpuri its first regional offering in the Bhojpuri Regional space. B4U Bhojpuri a Bhojpuri movie channel targeted at audiences in UP, Bihar & Jharkhand launches with a bank of most popular exclusive Bhojpuri Movies.
Regional language programming has penetrated different mediums, FTA audiences and languages like Bhojpuri would see the maximum growth owing to universe change as per BARC. In the last 3 years the audience base in Bihar/Jharkhand has grown from 24 million in 2016 to 39 million in 2019 a 62% growth in audience base which B4U Bhojpuri is capitalizing on opportunity.
Speaking to Sandeep Gupta, CFO and COO - Broadcasting India said, “B4U Bhojpuri is a unique offering for the audience with a premium packaging unseen in the Bhojpuri genre. As a content mix we are offering audiences a mix of devotional songs, festive programming during cultural events like Chhatt, Navratri, Diwali and Holi. Besides we are also announcing 2 WTP’s (World Television Premieres) for Bhojpuri audiences every week which is an unmatched offering by any other channel in the HSM market.”
The channel has movies of superstars like Nirahua (Dineshlal), Khesari, Pawan Singh etc from the Bhojpuri movie industry. The 2 WTP’s every week proposition is a never before offering in the Bhojpuri Genre and is sure to hook audiences from 15th May 2019 onwards on DD free dish and other cable and DTH networks.
The channel has also released a Brand film with the brand philosophy of “Dilwa Bhojpuri Ba” which is core to every Bhojpuri person who is truly Bhojpuri at heart and shows how the community is so closely connected both with the culture and language.
B4U Bhojpuri is coming up with 6 programming bands with different movies of named Patna Talkies, Bhojpuri Multiplex, Gorakhpur Theatre, Arra Chappra Hall, Banaras Mahal & WTP’s which would be played over the weekends.
B4U is also going all out with a TV campaign to promote this brand film along with its unique WTP movies on outside network channels focused on UP/Bihar/Jharkhand along with OOH in all the 3 states covering over 40 cities with 400+ sites.
To launch the channel B4U Bhojpuri has opened a free screening for viewers and media in Arrah near Patna where Bhojpuri speaking audiences would be able to see ‘Nirahua Hindustani 2’ and engage with B4U Bhojpuri’s engagement onground.
About B4U:
B4U Network is the leading Television network with over 300 million Plus viewers in over 100 countries. B4U Music ranks among the top 2 channels in the Hindi music genre while B4U Movies ranks among the top 3 channels in Hindi Movie Genre in India. B4U is entering the regional entertainment space with B4U Bhojpuri, a Bhojpuri Movie Channel.
The Network’s motion picture business which is into film production and distribution both in India & internationally has Bazaar and Pataakha as the last 2 releases this year. More information about B4U is available on www.b4utv.com. You can keep abreast of all B4U shows on social media platforms like Twitter - @THEOFFICIALB4U; Facebook – B4UMusic.